Welcome to our comprehensive guide on tonsillitis in children. As a parent, it’s natural to be concerned when your child is sick, and tonsillitis can be particularly worrying. Not only is it painful and uncomfortable, but it can also lead to severe complications if left untreated. In this guide, we’ll provide you with all the information you need to understand what tonsillitis is, how it’s diagnosed and treated, and how you can prevent it from happening in the first place.

The tonsils that most of us are familiar with are actually known as the palatine tonsils to differentiate them from the lingual tonsils, which are tissue that can be found on the back portion of the tongue.  The tonsils are lymphoid tissue and therefore are part of the body’s surveillance system to identify and react to “foreign invasion” to maintain one’s health, whether it is forms of infection or abnormal cells in the body such as cancer.  Material that exists outside blood vessels (“lymph”) is collected into the lymphatics, a separate collection of small vessels that eventually feed into structures such as a lymph node -or a tonsil- where the material is assessed and any necessary response by the body is initiated.  Eventually, this fluid is collected and directed back into veins to ultimately be processed as waste.  In the head and neck area, the system has tremendous redundancy with not only the tonsil and adenoid tissue, but also hundreds of lymph nodes.

Tonsillitis refers to inflammation of the tonsil tissue.  It is the most common infectious and can be caused by either bacteria or viruses.  Symptoms include a sore throat, which can be quite severe, difficulty swallowing or speaking, fever, lethargy, and painful lymph nodes in the neck.  Occasionally the infection can cause referred pain in the ear.  Accompanying these symptoms, examination of the throat will reveal swollen, red tonsils, which may have a white or yellow coating or “exudate” on the surface. 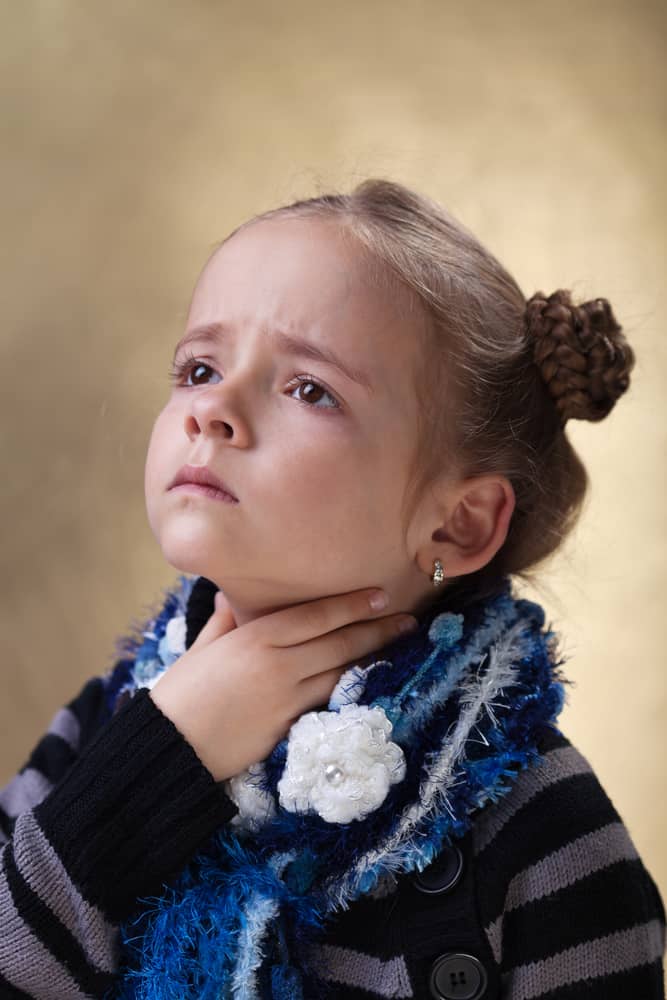 Bacterial tonsillitis is thought to be more commonly associated with a more severe sore throat and the presence of an exudate.  Although several different bacteria can cause tonsillitis, group A streptococcus or “group A strep” is the most commonly discussed and responsible for tonsillitis strep throat.  This infection is a contagious form of tonsillitis passed through close contact.  The reason for concern regarding strep throat is that children and teens risk developing rheumatic fever and subsequent damage to the heart and kidney if a health care provider does not properly treat the infection.

Due to this risk, a rapid strep test is commonly performed when the diagnosis is considered.  This involves a swab over the tonsils and back of the throat.  Although this may be slightly uncomfortable and cause the child to gag, there is no real risk associated with one’s health with this test.  It can provide the doctor with information very quickly as to whether group A strep is detected.  Since the test is approximately 95% sensitive, a negative test should be followed by culture by the doctor to rule out the 5% chance the rapid test was incorrect.

It should not be assumed, however, that a negative strep test confirms a viral cause.  The previously mentioned throat culture can be performed, but results can take a few days. While the medical doctor and patient should understand the risk of indiscriminate use of antibiotics, the presence of significant symptoms in a patient with a negative strep test may still warrant antibiotic treatment.

Typically tonsillectomy affects both tonsils symmetrically.  However, the patient occasionally reports that the sore throat is more significant on one side.  There may even be ear pain on that side, a change in voice, and difficulty swallowing.  If these symptoms occur, the patient should be seen urgently by a medical doctor, preferably one trained in otolaryngology (ENT), as it may indicate the formation of a peritonsillar abscess.  This infection has progressed with the formation of an abscess around the tonsil.  If not treated urgently, it may spread and cause serious complications, even death.  Care involves antibiotics and commonly surgical drainage.  If surgical drainage is deemed necessary to treat the infection, it can be performed by the doctor either in the office or in the hospital, depending on the severity.

Viral tonsillitis is more common than bacterial, comprising 60-70% of all cases of child sore throat.  There are typically associated symptoms such as fever, cough, and fatigue.  The strep test and culture, if performed, would be negative.  Care is typically based on symptoms- normalizing fever, controlling discomfort, and decreasing congestion and cough.

A specific type of viral infection associated with tonsillitis is mononucleosis (mono), caused by the Epstein-Barr virus (EBV).   Mono typically is associated with systemic symptoms such as fatigue, swollen lymph nodes, and fever.  Enlargement of the liver and spleen may also occur.  Tonsillitis in mono can result in significant growth of the tonsils, making it difficult to swallow or even feeling as if it is difficult to breathe.  In these cases, treatment may include oral steroids to decrease the swelling.

In some patients, symptoms of tonsillitis seem to keep occurring over and over again.  A patient may be left with a chronic sore throat and even fatigue, despite the absence of the more severe symptoms of an acute attack. These chronic cases are thought to be because certain organisms can form biofilms.  Biofilms are a community of organisms that form an exterior coating which can allow them to exist in areas of the body- such as the tonsils-without the host being able to eliminate the organism.  Antibiotics also are not effective against biofilm protection.  This contained infection can then erupt into an acute episode, especially if the host’s immune system is weakened temporarily.

If a child has a single or only occasional episode of tonsillitis, medical management, as discussed previously, is usually adequate to maximize the patient’s health.  However, in the patient with recurrent acute tonsillitis-repeated episodes lasting days-or chronic tonsillitis- chronic low-grade symptoms such as sore throat- a more permanent solution may be indicated.

Guidelines for surgical treatment of tonsillitis have been established for those individuals in the pediatric age group with recurrent acute tonsillitis.  The most recent recommendations are for a child with seven or greater infections in the past year, five infections a year for the past two years or three infections a year for the past three years.  Although these recommendations are helpful, one must evaluate each child since tonsillectomy may be reasonable in those patients falling below those criteria but who have complicating factors such as the severity of the infections, duration of illness affecting work or school, or difficulty with repeated antibiotics.

Tonsillectomy may also be indicated in those patients who have chronic tonsillitis.  Chronic sore throat or the repeated formation of tonsil stones (tonsilliths), which can cause bad breath, can alter one’s quality of life such that a permanent solution is desired.

Tonsillectomy involves the removal of the tonsil tissue.  There are records that the first such procedure was done over 2000 years ago.  Over the years, numerous techniques have been used.  These have included a traditional surgical scalpel, wire “snares,” and various forms of heat energy, including lasers.  Although each technique has its proponents, no single technique has been shown to be dramatically better than the others.  More recently, however, the performance of an intracapsular tonsillectomy which leaves a very thin layer of tonsil tissue behind, has demonstrated an improved recovery.

No matter which technique the otolaryngologist uses, the procedure is performed under general anesthesia in a hospital or surgery center.  A device keeps the mouth open, and each tonsil is carefully dissected from the bed in which it sits.  The numerous blood vessels that feed the tonsil are usually cauterized during removal to reduce the chance of bleeding.  Once the surgery is complete, the child is awakened from anesthesia and observed in the recovery room.  Most patients can be discharged home after an hour or so.

The recovery from a tonsillectomy involves significant discomfort and can last 7-10 days.  Pediatric patients may need significant encouragement and support to eat and drink enough to sustain themselves.  Pain management can involve non-narcotic and narcotic pain medicines.

Overall, tonsillectomy is a very safe procedure. However, the one significant risk is postoperative bleeding which most commonly occurs 5-8 days after the surgery in 1-7% of cases.  Cauterization may be required in the doctor’s office or operating room under a brief anesthetic.  Once the child( recovers, the episodes of tonsillitis should end as the inflamed tissue has been removed.