Sleep apnea is a common sleep disorder that affects millions of people worldwide. It occurs when a person’s airway becomes blocked during sleep, causing them to stop breathing for short periods. This lack of oxygen can seriously affect both physical and mental health. So if you’re experiencing insomnia, fatigue, depression, anxiety, hypertension, headaches, or other symptoms, it’s essential to consider the possibility of sleep apnea.

Quality sleep is one of the foundations of good health. We all should spend roughly 30% of our lives sleeping. We should not only want to spend enough time asleep but also ensure our sleep is uninterrupted and provides our body with all the benefits it is meant to have.

In some cases, we are at fault. We do not follow the correct framework to facilitate quality sleep. We may not allow ourselves enough hours to sleep or do not provide an appropriate environment to fall asleep or stay asleep. However, there are sleep disorders that interfere with our sleep that are not caused by issues entirely under our control.

Sleep apnea occurs when breathing is disrupted during sleep. Obstructive sleep apnea (sometimes referred to as “OSA”), which is present in 5-10% of the population, is caused by a physical obstruction in one or more locations of the airway from the nose to the back of the tongue. As an individual attempts to enter the deeper stages of sleep, muscle relaxation occurs. However, if a part of the airway is too narrow or too “floppy,” it will close off the breathing passage. Luckily, in most cases, this obstruction to breathing is recognized by the brain, which then shifts the patient into a more superficial level of sleep, reinstituting muscle tone and opening the airway. Unfortunately, this disrupts the normal sleep cycle.

Additionally, oxygen levels in the bloodstream can drop, and chemicals such as adrenaline are released in response to the obstruction of breathing. The heart and brain are two organs that can be damaged by this combination of low oxygen and increased needs stimulated by adrenaline. Heart attack and stroke risk have increased in individuals with even moderate untreated sleep apnea. Therefore, sleep apnea symptoms can be caused by disrupted deep sleep and the physiologic response to these interruptions. 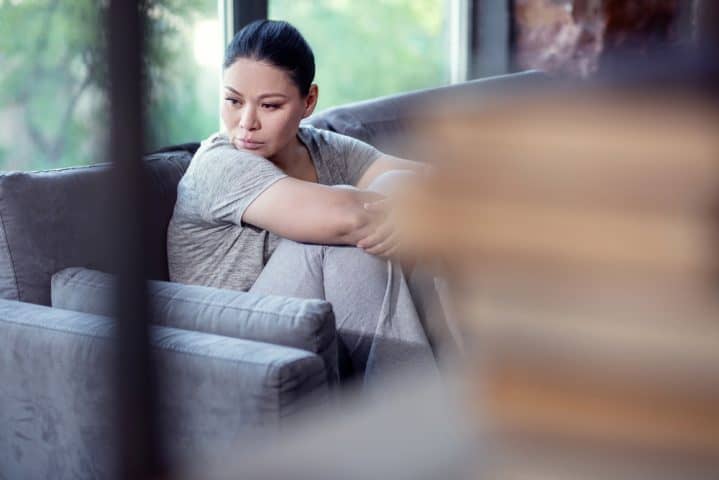 Know the Signs of Sleep Apnea in Yourself or Your Partner

Feeling tired, especially after sleeping adequately, is a common sign of untreated sleep apnea. However, since fatigue is a subjective complaint, it is not always acknowledged by the patient. In many cultures, admitting fatigue can be perceived as laziness. Therefore this symptom can be minimalized or even denied by the patient. Fatigue can also be blamed on other factors such as stress, lack of exercise, or age. In addition, sometimes, a significant amount of time is spent investigating other health causes, such as anemia or hypothyroidism. Some patients are labeled with Chronic Fatigue Syndrome before their sleep is evaluated. While all these issues can contribute to fatigue, it is essential to rule out sleep apnea, as untreated sleep apnea has serious health consequences.

For the reasons above, as well as other issues, the lack of fatigue should not be considered a reason to rule out the diagnosis of obstructive sleep apnea. In some patients, this chronic disruption of restorative sleep is manifested in alterations in attention span, concentration, cognitive function, and memory. In the pediatric age group, as many as 40% of all children diagnosed with attention deficit disorder or attention-deficit/hyperactivity disorder are found to have sleep apnea as a cause or contributor.

Depression may be the only sign of undiagnosed sleep apnea. A patient diagnosed with depression may exhibit poor sleep, weight gain, difficulty concentrating, and altered mood- all symptoms that can be caused by disruption of deep, restorative sleep. At the very least, restoring quality sleep will allow the patient to have an increased ability to deal with the side effects of these disorders.

Anxiety may be caused or worsened by obstructive sleep apnea. The interruption of deep sleep and lack of recovery of specific brain areas can lead to heightened irritability and difficulty coping with daily routine issues. Also, due to similar side effects of undiagnosed and untreated sleep apnea, the obsessive-compulsive disorder can be encountered.

Difficult to control- sometimes referred to as refractory- hypertension can be due to untreated sleep apnea. The National Institute of Health estimates that 50% of all patients with hypertension have obstructive sleep apnea and labeled sleep apnea as a critical secondary cause in 2003. However, this association is still commonly missed. Therefore, if a patient has newly diagnosed high blood pressure and does not respond to typical treatment, evaluation for sleep apnea should be performed.

Headaches, especially first thing in the morning, can signify untreated sleep apnea. It is presumed that these headaches can be due to the disruption of deep sleep and the intermittent decrease of oxygen to the brain.

One likely has sleep apnea if one’s bed partner observes obstructed breathing during sleep. This can be true apnea- the stoppage of breathing for longer than 10 seconds- but can also include gasping or struggling to breathe. Partial obstructions, some of which can be missed by a bed partner, are called hypopneas and may impart as much risk as true apnea. Snoring can also be a sign of sleep apnea.

In children, snoring is always an indication of airway obstruction during sleep and should be evaluated. In adults, loud snoring is likely to indicate sleep apnea in 80% of cases. It should be noted, however, that the absence of snoring does not rule out sleep apnea. Even health information shows that snoring without a finding of obstructive sleep apnea can increase the risk of heart disease and stroke. If there are other signs or symptoms, an evaluation with a doctor should still be considered.

Bruxism, or grinding one’s teeth, can indicate sleep apnea. If one is aware of this issue or evidence is apparent on a dental examination, a thorough evaluation of the patient’s airway and questions regarding other possible signs or symptoms should be undertaken.

Nocturia, awakening during the night to urinate, may indicate untreated sleep apnea. Over 84% of patients with sleep apnea reported it as a symptom. Indeed, this symptom is more frequent as we age; however, care should be taken to assume it is not a sign of obstructive sleep apnea.

If You Suspect Your Life is Being Affected by Sleep Apnea, Don’t Wait to See a Doctor

Quality sleep is vital for health. However, untreated sleep apnea will destroy good sleep and increase the chances of other potentially life-threatening diseases, such as heart disease and stroke. Therefore, awareness of the potential signs and symptoms of sleep apnea is essential for your doctor and you so the diagnosis is noticed.