We have moved! Our new address is 1300 University Drive, Unit 4 Menlo Park, CA 94025
COVID-19 Update:
We are now open and seeing patients. Please be assured we have installed measures based on regional and Federal guidelines for distancing and sanitation to ensure the safety for all of our patients and staff.

When functioning normally, the space behind the tympanic membrane (eardrum) normally is filled with air that is at the same atmospheric pressure as our surroundings. This allows this membrane to vibrate easily when exposed to sound. This vibration then is passed along the three small hearing bones (ossicles), which then move fluid in the inner ear and ultimately is perceived by the brain as sound. The maintenance of equalized pressure is accomplished by a small muscular tube- the Eustachian tube- which connects the area behind the eardrum to the back of our nasal cavity.

Every time we talk, swallow or yawn this tube opens and shuts to maintain equal pressure. Sometimes we have to augment this function- for example when we “pop” our ears when traveling in elevation or on an airplane. Keeping this space behind the eardrum filled with air and at the correct pressure is the function of the Eustachian tube. However, sometimes the tube itself does not function correctly. This can happen accompanying an upper respiratory tract infection. The congestion we experience can cause swelling of the Eustachian tube, therefore impacting its ability to maintain equal pressure. If this is significant enough, negative pressure will form behind the eardrum- essentially a small vacuum. This negative pressure can actually pull fluid from the tissue lining the area. This trapped fluid can lead to a sense of fullness, a loss of hearing, and ultimately can become infected.

This is otitis media– an infection of the middle ear space.

Dr. Jerome Hester is a San Francisco Bay Area ear, nose, and throat specialist with decades of experience and he obtained his training in Otolaryngology/Head and Neck Surgery at Stanford University. He takes a comprehensive approach with every patient for the best level of care, always assessing the entirety of the symptoms and performing a thorough anatomic inspection of the nasal passages, sinuses, and ears as well as a complete history of the individual’s symptoms in order to create a personalized treatment plan.

Young children are more prone to these infections due to several factors. The anatomy of the Eustachian tube itself is perhaps the biggest contributor. In this age group, the tube exists with a much more acute angle than in adults. It is felt that this impairs its normal function. Additionally, in this age group, the adenoids, which are tissue similar to tonsils but exist in the back part of the nose, can actually obstruct the opening of the Eustachian tube. They can also become chronically infected and serve as a source of inflammation also leading to poor function of the tube and the development of negative pressure behind the eardrum. Finally, there can be congenital factors such as cleft palate or environmental factors such as second-hand smoke which can increase the chance of middle ear infections.

In some individuals, the imperfect function of the Eustachian tube persists into adulthood. This can be at a mild level-making it difficult to equalize when flying or traveling at altitude, or not being able to scuba dive. They may also occasionally have negative pressure or fluid build-up behind the eardrum during a significant head cold. Rarely do these events progress to an infection. A smaller subset of patients does have severe Eustachian tube dysfunction as adults. They will have recurring episodes of otitis media requiring antibiotics. Due to the chronicity of this problem, some form of surgical intervention is usually necessary to stabilize this condition and limit the number of infections and prevent permanent damage. Luckily, in most individuals, the anatomy of the Eustachian tube does mature and middle ear infections become rare. These usually occur with a head cold, sometimes complicated with air travel while the patient is ill. This combination of events stops the ability to equalize pressure behind the eardrum and leads to the events described earlier. The patient will develop increased pressure in the affected ear, pain, and decreased hearing.

It is important to take a complete history from a patient with otitis media, to look for causes, and also to ascertain whether the condition is acute (a relatively unique experience for the patient) or chronic (a condition the either is repetitive or does not ever truly resolve). Dr. Hester will take the time to take a complete history and perform a comprehensive examination to understand your exact situation, as the correct treatment does depend on understanding your specific condition. 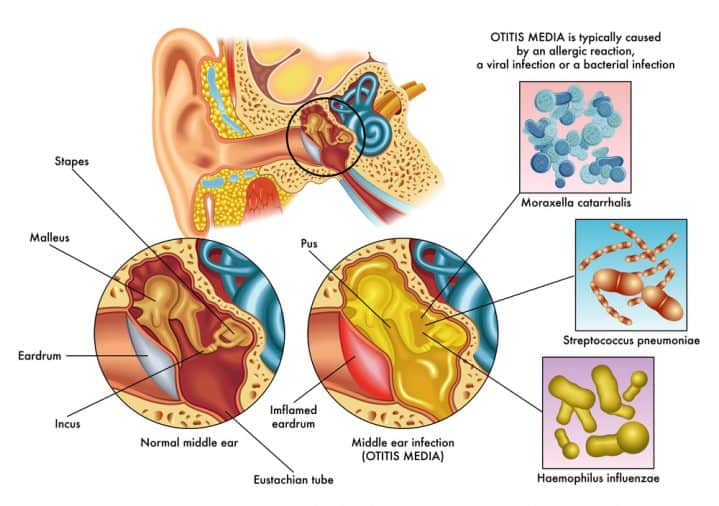 -Medications: Traditionally, treatment for otitis media has been oral antibiotics. A 5-7-day course of an appropriate antibiotic is typically prescribed. The physician may also recommend the addition of a decongestant in an attempt to reduce inflammation and help the Eustachian tube to function normally again. The decongestant can be oral (for example Sudafed), or in the form of a topical nasal spray (Afrin or Neo-synephrine). Both of these types of medications can be obtained without a prescription. The nasal sprays tend to be more effective and generally avoid systemic side effects, but can only be used for a short period of time (3-5 days) due to the risk of “rebound,” a situation where the symptoms of congestion actually worsen, leading the patient to use more of the drug, which again makes symptoms worse.

Other medications that are sometimes recommended such as antihistamines (Claritin, Zyrtec) and nasal steroid sprays (Flonase) have very little impact on the otitis media and should only be added if other conditions accompany the ear infection.

There have been studies showing that with the use of decongestants alone, antibiotics can be avoided. The effectiveness of this treatment may be dependent on several factors including the severity of the symptoms of the infection, how long it has already been present, and whether there are more systemic symptoms present. Certainly, after a thorough history and physical exam, Dr. Hester will be pleased to discuss the appropriate options.

With chronic otitis media, other factors such as allergies can be examined. Although allergies generally play a smaller role than one may imagine, the inflammation caused by allergy can worsen Eustachian tube function. Treatment may be identification and avoidance, medications such as antihistamines, or desensitization by an allergist.

-Acute otitis media: Treatment for acute otitis media is generally medical. However, occasionally if the pain and pressure are too great, a small incision can be made in the eardrum to remove the fluid and reduce pressure. The incision generally closes in 48 hours leaving no long-term side effects. This is known as a myringotomy and can be done in the physician’s office using a microscope and requiring only a topical anesthetic. The improvement in symptoms is typically immediate and there is little or no recovery.

-Chronic otitis media: In the chronic condition, providing longer-term improvement is desired. Eustachian tube dilation is a procedure where a small endoscope is placed into the nose so that the opening of the Eustachian tube can be directly visualized. A small balloon catheter is then passed into the opening and the balloon inflated. After approximately 2 minutes it is deflated and removed. This dilation has been shown to give long-term benefit for the improvement of Eustachian tube function therefore reducing the chance of development of chronic otitis media. It can also be useful in reducing the feeling of “fullness” these patients can feel in the ear even when they are not infected, and improve the ability to equalize pressure in the ear when there is a change in altitude. Although this commonly requires brief sedation, there is no significant pain associated after the procedure and recovery are almost immediate.

-Pressure Equalizing (PE) tubes: In chronic situations, a small tube can be placed after performing a myringotomy, therefore providing a long-term mechanism for pressure to equalize in the space behind the eardrum. In children, this requires a very brief anesthetic (less than 5 minutes), whereas most adults can tolerate this without sedation and have it performed in the office. In either case there is no significant recovery time and patients will see an immediate return to normal activity. Since the underlying problem in children is usually resolved as they mature, many times this only needs to be performed once and after the tube falls out-usually in 6-12 months- there is no need for replacement, although in some children more than one set is needed before they completely outgrow the condition. In some adults, a tube is placed due to the persistence of infection and/or fluid without any previous history of this issue. Once again, in this case, only a single tube placement is necessary. In others, this is a problem that has persisted since childhood and therefore they require tubes for the long term.

Mastoid Surgery: In a very small subset of patients, Eustachian tube function is extremely poor, or correct treatment is delayed and complications of otitis media can develop. In these cases, the infection penetrates the surrounding bones of the skull (especially the mastoid bone), and extreme cases can infect the brain. In that situation, surgical treatment with dissection and removal of the infected areas must be performed.

Improve Your Quality of Life with Freedom from Middle Ear Infections

Whether it is an isolated case of otitis media, or a more chronic condition involving you or your child, Dr. Hester will identify the appropriate care to resolve this issue to relieve your symptoms and prevent the progression of the disease process.